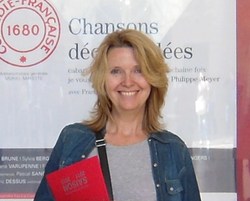 Mary-Anne Gifford is a director, writer, dramaturg and teacher. She has directed over forty theatre productions including productions in Vietnam and United States. She was Artistic Director of Railway Street Theatre Company for six years, Centre Director of Australian National Playwrights’ Centre in its final year and Manager of Part-time Courses and Open Program Productions for National Institute of Dramatic Arts (NIDA) from 2009 to 2012. Mary-Anne has worked extensively as a lecturer and tutor at NIDA and University of New South Wales (UNSW), and participated at the Australian National Playwrights' Conference several times as a dramaturg and director. Her play, Something More Than Night, was short-listed for the 2013 Patrick White Playwrights' Award and long-listed for Queensland Premiers Drama Award 2016/2017. The play is published by Australianplays.org and can be found at https://australianplays.org/script/ASC-2287 Mary-Anne has a Doctorate of Philosophy (PhD) from UNSW, with a specialisation in creative practice, a Graduate Diploma of Dramatic Art in Writing for Performance from NIDA, a Graduate Diploma of Dramatic Art in Directing from NIDA, and a Bachelor of Arts with first class honours from UNSW. Her PhD dissertation is titled Vaudeville: The Last Theatre of the Working Class. Her latest full-length play is part of the creative practice of the doctorate and is called Ferocious.
Proudly powered by Weebly